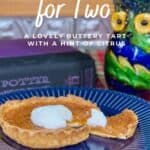 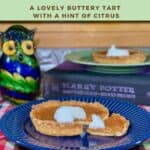 Treacle Tarts have a lovely buttery flavor with a hint of citrus and a texture similar to Pecan Pie. Harry Potter loved them, & so will you!

I'm in the doldrums of Droughtlander (that is, the time between the last and next season of Outlander, the show that started me on this journey).

My friends, Mary & Blake, are also on a hiatus from their OutlanderCast podcast, but have filled the gap with The Potterverse, a podcast that has reignited my passion for Harry Potter.

Seriously, if you're a fan of the books and/or movies, and you want to listen to a humorous and thoughtful chapter by chapter discussion of said universe, give this podcast a listen. You'll be engaged and entertained from the first show!

Anyway, it won’t surprise you to hear that my rediscovered interest in Harry Potter would inevitably turn to food. And what better place to start than Harry's favorite dessert, Treacle Tarts!

The product itself is a syrupy by-product of refining cane sugar. We in the US don't have an equivalent for light treacle, so there aren't really recipes for that here. We do frequently use molasses in treats like gingerbread, molasses cookies, and Shoofly Pie.

Many recipes for Treacle Tarts state treacle in the ingredients list without defining which one to use. Or worse, saying you could use either one. However, there are major differences in flavor between the two, so it's important to choose wisely.

Treacle Tarts are a quintessential British dessert. The first mention of them came from the late 19th Century cookbooks of Mary Jewry, and they've gained a huge following since.

There are many Treacle Tart recipes available. These recipes are for a tart made of a shortcrust pastry shell with a thick filling of golden syrup (light treacle), breadcrumbs, and lemon juice or zest.

The differences between many recipes center on (1) whether or not heavy cream, butter, and egg is included in the filling, and (2) whether the tart is topped with a lattice crust.

The filling is less dense when heavy cream, butter, and egg are included, and the texture is like Pecan Pie or Brown Sugar Pie. That sounds good!

I also chose not to use a lattice top because I wanted the filling to be featured rather than the crust. That, and I just didn't feel like making one.

Instead of making one large Treacle Tart in a 9-inch tart pan, I chose to make four small, sharable-for-two tarts in 4-inch mini tart pans. Since there's only myself and my husband at home right now, I don't want a big tart tempting me.

It's all about portion control, people. Besides, they're really cute!

In order to make four mini tarts, I took a full-sized recipe and divided it in half. The problem was that most recipes use only one egg in the recipe.

How do you measure half an egg?

Well, luckily my Basic Shortcrust Pastry also uses a whole egg in the recipe. Since I also only needed half of that recipe, I cracked an egg into a small bowl, weighed it, and measured out half for the shortcrust pastry and filling (that came out to about two tablespoons each).

I use a 6-inch round cookie cutter (the same one I used for my Checkerboard Cake) to cut out the pastry dough to line the tart pans. If that's not handy, tracing a 6-inch plate will work as well.

Another tip is to freeze the tart shells before baking them. That keeps the dough from slumping and shrinking when it's baked.

To blind bake crust (that is, bake it before filling it), the pie or tart pan is usually lined with parchment paper and filled with beans or rice. These help to hold the shell's shape.

My mini tarts are...uhm... small, and trying to fit parchment paper in the opening isn't practical. Instead, I use aluminum foil pressed tightly up against the sides (like I did when making Butterscotch Pie for Two). Remove the foil as you would the parchment paper and finish blind baking as normal.

While the tart shells are finishing baking, make the filling. It's just warming the golden syrup and mixing in the rest of the filling ingredients. Super simple!

Like with most custard pies, only bake the tarts until the filling is just set. For these mini tarts, 15 to 20 minutes should do it.

No wonder Harry Potter loved them

Treacle Tarts remind me of the aforementioned Brown Sugar Pie although less caramelly and more buttery from the golden syrup. There's also a lovely citrus note underneath that keeps the sweetness from being too cloying.

In other words, Treacle Tarts are yummy! No wonder they were Harry Potter's favorite dessert at Hogwarts.

Served with lightly sweetened whipped cream (or clotted cream, or even vanilla ice cream), Treacle Tarts will surprise and delight you. And the mini size is perfect for sharing with a special someone (or maybe not...I won't judge!).

Oh, and what else can you make with that Lyle's Golden Syrup? Make Sticky Toffee Pudding, another wonderful British dessert!

I bet Harry would approve!

Do you want to continue with our focus on British desserts? How about holding a High Tea?

Traditional High Tea (or more technically, Cream Tea) calls for Cream Scones with jam and clotted cream. Here are some ideas to try... 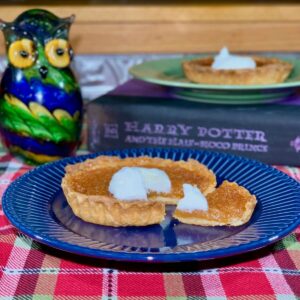 When making the short crust pastry, measure 1 egg into a small bowl. Use half for making the pastry and the other half to make the tart filling. Use fresh bread crumbs made from white or egg bread. Avoid wheat bread as it can impart a bitter taste to the filling. One 4-inch tart serves two in our family. The rest freeze well. Defrost overnight in the refrigerator to thaw. For one full-sized tart, double the recipe and use a 9-inch tart pan with a removable bottom. Increase the short crust blind baking to a total of 30 minutes, and bake the filling for 30 minutes or until set.

Go beyond the store bought cake and make a celebration dessert to remember!

Lighten up your dessert table with these summer berries. Or, avoid the oven entirely with these no bake options. Either way, it's time to celebrate the season!