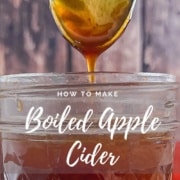 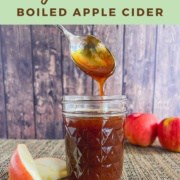 Boiled Apple Cider (aka Apple Cider Syrup) takes everything yummy about apple cider and concentrates it to a thick syrup. It's easy to make, and gives you the secret ingredient you need to take all your apple treats to the next level of flavor!

[October, 2022: I've reworked the recipe and updated this post with new pictures. Enjoy!]

Autumn is my favorite season, especially in the culinary sense (the other senses also…I love New England fall foliage!). No other season is so identified with flavor.

With apple, maple, pumpkin, and cranberry evoking wonderful sights and aromas of pies, cookies, and bars, I could go on and on. And then there's that catch-all for Fall flavor, pumpkin spice.

Apple pies practically scream autumn. All those baking spices mixed with the wonderfully sweet tart taste of apples. But can you make apple pie even better? That's a big yes, if you use a certain secret ingredient…Boiled Apple Cider (aka Apple Cider Syrup).

Keep it plain, or add flavorings like 2 or 3 cinnamon sticks, a fresh vanilla bean, split lengthwise, some orange zest, or (my favorite) ¼ cup of whisky or rum to your cider at the beginning of the simmering process.

How to make boiled cider at home

So how do you make apple cider syrup? It's just as easy as it sounds. Just know that it's going to take a few hours to make it, so plan accordingly.

Step 1: Transfer cider to a pot

Take fresh, unfiltered apple cider and pour it into a heavy pot along with your preferred flavorings (photo 1).

After bringing the cider to a boil, reduce the heat to keep the cider at a simmer. You should see small bubbles.

One way to measure your progress is to use a skewer to see how far down the cider has evaporated (photo 2). When it's done, the volume will be about ⅛th its original height.

Here's the boiled cider after 2 and 3 hours of simmering (photo 3):

The cider will be ready when you stir it and dark copper-colored bubbles form, covering the entire surface (photo 4). If you were to smear a small amount on a plate, it will have the consistency of warm, runny honey.

Boiled apple cider thickens as it cools, so don't over-cook it. Once you've achieved the right consistency, remove it from the heat and strain it through a fine mesh strainer into a canning jar to remove any impurities.

It should keep more or less indefinitely when stored in the refrigerator.

How much apple syrup do you get from a ½ gallon of apple cider?

Boiling cider evaporates the water in much the same way as how maple syrup is made, and the final product will be ⅛ of the original volume. So, a ½ gallon of fresh cider will give you about 1 cup of apple syrup and will take about 3 to 4 hours to make. You can also double the recipe to one gallon which will yield about 2 cups and will take 5 to 6 hours to reduce.

What kind of pot is best to use to boil apple cider?

If you're starting with ½ gallon of apple cider, a 4-quart heavy duty pot is fine. Starting with one gallon will require at least a 5-quart pot. Either way, it's best to use an enamel-coated cast iron pot or Dutch oven. According to one commenter on King Arthur Baking, don't use a cast-iron pot unless it's enamel coated. Otherwise, the iron can infuse into the syrup and ruin it.

Can I use a crockpot to make boiled apple cider?

According to King Arthur Baking, yes! You can reduce one gallon of unfiltered cider in a covered slow cooker over 2 to 3 days. You'll still have to stir it every 1 to 2 hours to keep it from scorching, so it's best to turn off the slow cooker overnight.

There are so many ways that you can use boiled cider.

Try putting just ¼ cup into your favorite recipe for apple pie. Your friends and family won’t know how you managed to pack so much flavor into a pie crust!

Beyond apple pies, there are so many ways to use apple syrup. Here are some examples:

Then there are the recipes. Try an Apples & Honey Babka, Apple Galette Tart, or Apple Crisp, just to name a few.

I’m telling you, making boiled apple cider is going to take your fall baking to the next level!

I had the same strange experience twice while boiling down apple cider. After reducing it to ⅛ of the original volume, the cider separated into a watery layer over a layer of sediment instead of getting thick like honey.

I hadn't noticed that both times I was using cider that had been filtered and contained preservatives to maintain freshness. When I purchased unfiltered, preservative-free, organic apple cider, it reduced beautifully. The moral of this story: use the good stuff for apple syrup and leave the rest for drinking.

Do yourself a favor on a crisp, fall day - boil down some apple cider to have on hand as your secret fall flavor enhancer. Not only will you take the flavor of your favorite apple dishes to the next level, you’ll perfume your home with the wonderful scent of apples.

Better still, give as a gift. It's a thoughtful way of sharing fall with friends and family. Be sure to include some how-to-use-it suggestions and recipes. Feel free to use my suggestions above!

I’m busy planning my fall baking agenda, and I’m sure this delicious secret ingredient will be well utilized! 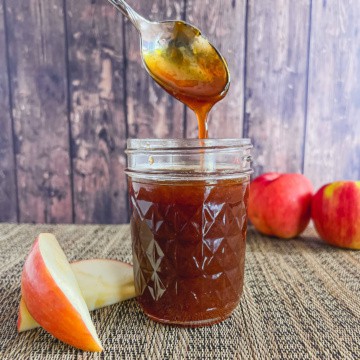 Tammy Spencer
Boiled Apple Cider (aka Apple Cider Syrup) takes everything yummy about apple cider and concentrates it to a thick syrup. It's easy to make, and gives you the secret ingredient you need to take all your apple treats to the next level of flavor!Adapted from King Arthur Baking
5 from 3 votes
Print Recipe Pin Recipe Save Recipe Saved Recipe
Cook Time 3 hrs
Total Time 3 hrs
Course DIY ingredients
Cuisine General
Servings 16 tablespoon
Calories 54 kcal

You can flavor your boiled cider in a number of ways. Add 2 or 3 cinnamon sticks, a fresh vanilla bean, split lengthwise, some orange zest, or (my favorite) ¼ cup of whisky or rum to your cider at the beginning of the simmering process. Be sure to use a heavy duty pot that holds at least 4 quarts for ½ gallon of cider (the cook time will vary depending on your stove and the size of the pot you choose). An enamel-coated cast iron pot or Dutch oven works well. According to one commenter on King Arthur Baking, don't use a cast-iron pot unless it's enamel coated. Otherwise, the iron can infuse into the syrup and ruin it. This recipe can be doubled by starting with a gallon of apple cider, and will reduce to 2 cups of boiled apple cider. Use at least a 5-quart pot and be aware that the cooking time can be upwards of 5 to 6 hours, so plan accordingly.