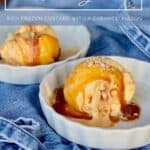 Nobody told me how things would change as I aged. Sure, there are the obvious changes in skin tone (does it have to sag like that!) and hair color (which my hairdresser assures me no one will know about…don’t tell anyone I told you).

But I didn’t know my tolerance for sweets would diminish (hence my overfondness for dark chocolate), and that dairy products would become a problem.

If I have something dairy that hasn’t been cooked or processed by bacteria (think puddings, the pastry cream in Boston Cream Pie, hard cheeses, or yogurt), then…uhm…pass the antacids this way, please.

Homemade ice cream is incredibly easy to make. At its most basic all you really need is heavy cream and a sweetener (that’s the base). After that you flavor your base as you please (vanilla beans, chocolate, mint…) and add mix-ins if you'd like (chocolate chips, nuts, cookie crumbles).

Then churn the base in an ice cream maker, and freeze until it hardens (called ripening). Easy peasy.

An ice cream custard base (aka frozen custard) is in the same family as pastry cream (a version of Crème Anglaise for you purists).

The benefit is that frozen custards are richer in flavor and have more body than regular ice creams. With that added richness comes added calories, and that’s where gelato comes into our story.

Gelato…all the flavor, not all the calories

Think of gelato as the lighter (in calories, not in texture) Italian cousin of ice cream. Its base typically has twice as much milk than cream, so it has a lower butterfat content than ice cream.

You’re not sacrificing any of that ice-creamy goodness though. Gelato is still smooth and rich, especially if you’re using a cooked custard base (which I am). Win!

Savory Simple had a recipe for Vanilla Milk Gelato that fit the bill for a custard-based gelato nicely.

Normally I’d be using the vanilla beans called for in that recipe, infusing them into the milk/cream mixture. However, I had run out.

I had the brainwave to use some almond extract in with the vanilla extract (just to up the flavor profile a little). That addition gave the gelato lovely buttery-almond notes.

I also decided to add a salted caramel sauce swirl. I thought it would complement the almond flavor better than chocolate (gasp!). The method for adding the caramel swirl came from Epicurious.

The ingredients for this gelato recipe are simple and few, which I appreciate.

If you want to leave out the almond extract, feel free...just up the vanilla extract to 1-½ teaspoon

Better yet, infuse the milk & cream with a vanilla bean, halved and scraped, letting it steep in the warm milk 30 minutes. Remove the spent bean before tempering the mixture into the eggs.

[Side note: For those of you wondering why I didn't add toasted almonds to my gelato, it's because my husband doesn't like nuts in his ice creams. I totally would have done it otherwise.]

How to make gelato

The process for making homemade gelato is just like that of making ice cream. The difference is that you must chill your base thoroughly before churning it.

Making the custard base is a straightforward process:

You'll want to chill your cooked base well (usually overnight) before churning it in your ice cream maker. My ice cream maker is an attachment to my KitchenAid Stand Mixer. If that's not available, this Cuisinart does a great job also.

...and how about that Salted Caramel Sauce?

Just use my recipe for Basic Caramel Sauce, adding 1 teaspoon salt after you remove the caramel from the heat.

Swirl in the caramel sauce in layers while the gelato is still soft, then put it in the freezer to ripen.

Tales of an imperfect chef

I did make the mistake of letting my attention wander a bit and I let the custard base boil after tempering in the eggs. The base broke, but after straining and chilling, the base froze like a dream…a rich, buttery, sweet dream.

As for the caramel sauce, after burning the sugar or having the sugar syrup seize on me in the past, I’ve learned to initially add a bit of water and a tablespoon of corn syrup to stabilize the mixture.

Also, here I didn’t let my attention wander…the syrup can go from just lightly amber to a black mess in less than a couple of minutes. Be diligent and be warned!

Caramel Swirl Almond Gelato has got to be one of the best ice creams (ahem…gelato!) I’ve ever made, and I’ve made a fair few.

The addition of a drizzle of extra caramel sauce (and maybe a drizzle of hot fudge, too...you didn't think I'd completely be without chocolate, did you?) just adds to the experience.

Most importantly, it makes my tummy happy, in more ways than one!

Custards come in many forms, but the method is similar across the board. Luckily, the technique is easy to master, and you'll be able to make a whole range of treats! 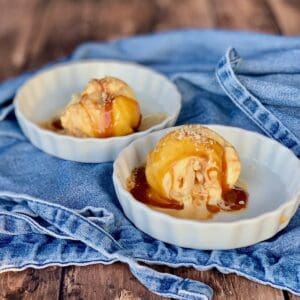 You can use any type of milk you'd like. I don’t keep whole milk in the house, so used 1% milk with no perceptible change in texture. For Salted Caramel Sauce, make a batch of Basic Caramel Sauce, adding 1 teaspoon of salt after you remove the caramel from the heat. If the sauce boils during thickening (breaking it), straining it out will help remove any curdled bits of eggs. If you want to leave out the almond extract, feel free, just up the vanilla extract to 1½ teaspoons. Better yet, infuse the milk & cream with a vanilla bean, halved and scraped, letting it steep in the warm milk 30 minutes. Remove the spent bean before tempering the mixture into the eggs. For those of you wondering why I didn't add toasted almonds to my gelato, it's because my husband doesn't like nuts in his ice creams. I would have totally done it otherwise. The ice cream maker I'm using is a KitchenAid Ice Cream Maker Attachment for my KitchenAid Stand Mixer. If that's not available, this Cuisinart does a great job also.

Cooling temperatures means cozy sweaters and trees showcasing their Autumn beauty, while Fall flavors feature apples, pumpkin, maple, and warm baking spices. From pies and cakes, to scones and crisps, why not give one of these Fall favorites a try?