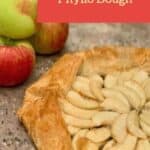 This simple tart, loaded with rich apple flavor, is encased in a crisp, buttery crust. An Apple Galette in Phyllo Dough is an elegant dessert that's sure to impress!

On apples and pies…

I recently went apple picking in New Hampshire, and picked up a couple of pounds of McIntosh apples (great for baking and eating). It’s an activity that still delights my Southern-Californian-heart as something so unique to New England in the Fall.

(Not another Fall-in-New-England rhapsody, please!) Don’t worry…I only bring it up to show why I decided to make yet another apple dish…apple galette, a quintessential Autumn baking treat.

What’s a galette? Glad you asked!

A galette is a rustic pie

Longtime readers know how much I like pie, in all its variations…in a crust, as a bar, or just as a slab (yeah, we get the picture).

One way I haven’t talked about pie is as a galette, aka a freeform pie. Basically, take a pie crust and don’t do any work putting it in a pie pan, crimping the edges, etc…just lay it on the counter, fill it, then fold over the edges to keep the filling in.

You need a fairly solid filling when making a galette, so save those custard-y type fillings like pumpkin or pecan for the regular type of pie (that is, unless you like having filling running all over the bottom of your oven. I won’t judge.)

For this apple galette, homemade applesauce is used as a base on which to place sliced apples, and the whole tart is brushed with melted apple cider jam to give it a pretty sheen.

Oh, and that homemade applesauce? It’s made with boiled apple cider, that concentrated concoction of intense apple flavor, to really ramp up the apple goodness.

Similar to tarts, galettes are usually made with pie crust, but can another type of crust be used? I didn’t feel like making pie crust, and had a box of phyllo dough in the freezer…could I use that? Well, you might have already guessed the answer (or seen the header picture), so…uhm…yes.

Working with phyllo dough is just a matter of taking a very thin sheet of dough, gently brushing it with ghee (aka clarified butter), melted butter, or in a pinch, a neutral oil, then stacking another layer on top. Repeat until you’ve built up a good base for your filling (that’s how baklava is made, by the way).

All those layers separated by the brushed-on butter produce a delicately crispy crust that’s perfect for any number of fillings, either sweet or savory.

There are a couple of caveats about working with phyllo dough. The sheets tear easily, so make sure you fully defrost them in the refrigerator and lay them out gently.

Also, said sheets also dry out quickly, so after you lay them out, cover them with plastic wrap and a clean, damp kitchen towel. Pull back the covering just to take a sheet to work with, then return the covering onto the rest of the stack.

Don't worry too much if the sheet tears a little as you brush on the ghee...all those layers will make sure everything works.

I was inspired to make my Apple Galette in Phyllo Dough from two different sources, Epicurious’ Apple and Calvados Tart and The Messy Baker ‘s Mixed Berry Phyllo Galette.

Originally I had wanted to use Calvados (an apple brandy) to flavor the applesauce (anyone for a boozy tart? I thought so), but I didn’t have any, didn’t want to buy any, and had the boiled apple cider on hand. The resulting applesauce was incredibly yummy.

Apples on and on…in flaky layers

This Apple Galette in Phyllo Dough was auh-mazing! Deeply apple flavored thanks to the boiled apple cider in the applesauce (and those freshly picked apples) and flaky and crispy from the phyllo dough.

I really liked how the crust’s flakiness didn’t compete with the apple filling as a regular pie crust might have. I brought this tart to a celebratory Rosh Hashanah (Jewish New Year) dinner to rave reviews (remember the Apples & Honey Babka? Another Rosh Hashanah treat as those are the symbolic foods of the holiday).

So there you have it, fall baking in a rustic, yet elegant, full-flavored apple galette. Give it a try and let me know how it goes by tagging me on Facebook, Twitter, or Instagram, or just drop me a comment below…I love to see your creations. In the meantime, I’ll be watching the leaves turn color…after all, it’s Fall in New England!

Pies can be sweet or savory, and there are so many fillings from which to choose. From fruits to nuts and custards, there's bound to be a pie that catches your fancy! Here are a few choices to try.

Need a base for a recipe? No problem! Here are recipes for a basic pie crust, graham cracker crusts, and a shortcrust pastry. Plus how to make a lattice pie crust!

For the apple slices

For assembly and finish

I used McIntosh apples, but any good baking apple you like will work well. Apples you can pick fresh from the orchard are wonderful. The applesauce can be made 3 days ahead and chilled, covered. I used ghee to brush the phyllo dough, but you can also use melted butter or a light neutral oil. I just liked how the ghee had the taste of butter without the hassle of the butter cooling and solidifying while I still needed to use it. If you are making the tart for an occasion in the more distant future, you can freeze uncooked, then bake from frozen, adding about 10 minutes baking time.

Here are what my readers' are viewing...