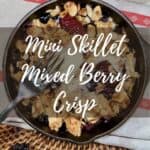 Can warm fruit bubbling under a crunchy, buttery topping be really dairy-free and made just for two? When it's a Mini Skillet Mixed Berry Crisp…yes!

It's a warm evening in August, and I want dessert.

Not just any dessert, mind you. I want the dessert that speaks to me of summer and all the summer berries that are ripe just now...a Mixed Berry Cobbler.

Except, I don't want to get out the mixer to cream together sugar and butter (or a butter substitute) for a cookie dough topping. Nor do I want to grate frozen butter for a sweet biscuit topping (like shortcake).

Crisps are easier than Cobblers

So you might be asking what's the difference between a fruit crisp and a fruit cobbler?

Cobblers finally evolved into the dessert we know today as having either a shortcake biscuit topping or a cake batter topping. My sugar cookie dough topping is a relatively recent addition to the cobbler pantheon.

A fruit crisp (aka fruit crumble) has the same cooked fruit at the bottom, but the topping is made of flour, sugar, and butter rubbed together. They started appearing in the US around the early 20th century.

So for a crisp, cool or room temperature butter will do. And to make it dairy-free, a butter substitute, like Earth Balance Buttery Spread, will do.

You can customize the topping with brown sugar, or adding rolled oats or sliced nuts. Or not.

Use the fruit you have

A Mixed Berry Crisp should really be called Any-Fruit-You-Want Crisp, because the fruit you use is entirely customizable to what you have on hand.

Want a Blueberry Crisp? Cherry Crisp? Peach or Apple Crisp? Go for it!

Speaking of Peach Crisp or Apple Crisp, I have directions for those variations in the recipe notes below. Plus, there's Peach Bourbon Crisp for a boozy version.

You know I'd go there, right?

Crisps are faster than Cobblers

A Mixed Berry Crisp recipe is so fast, the longest part will be waiting for the oven to heat.

Oh wait, I'm actually making a Mini Skillet Mixed Berry Crisp using a 6 ½-inch cast iron skillet, like I did for my Mini Skillet Hot Fudge Pudding Cake. Since it bakes in the toaster oven, the kitchen doesn't get warm. Score!

Just toss together the fruit with the sugar. Whisk the orange juice with the cornstarch, then toss that in with the fruit and put the whole thing in the skillet.

If you're using a firmer fruit (like peach or apple), you might want to cook the fruit a bit to soften it up. The instructions are in the Recipe Notes.

Mix the brown sugar in with flour, sugar, and a pinch of salt, then rub in the butter. Toss in the rolled oats and almonds, and the topping is done.

Just crumble the topping onto the fruit and you're ready for the oven!

My toaster oven tends to run hot, so I turned down the heat just a bit to prevent the nuts from overbrowning. Your timing and temperature may vary.

Whether you're making a cobbler, crisp, or crumble, this warmed fruit dessert practically begs for a scoop of vanilla ice cream.

Use homemade vanilla ice cream or store bought, regular or dairy-free. The choice is yours.

With no eggs, a dairy-free butter substitute, and an appropriate ice cream, Mixed Berry Crisp can be a vegan dessert!

Enjoying the taste of summer (or fall)

This is a recipe for Mixed Berry Crisp for two. However, my husband doesn’t like warm fruit desserts (crazy, right?!?). And I wanted one.

So I'm not going to confirm nor deny that I ate the whole thing myself.

One word of warning...if you make this crisp with blueberries, your smile can turn blue. Literally. I brush my teeth after eating it, but it's well worth it!

You can make the crisp beforehand and reheat it later (the topping won't be as crisp though). For a larger crowd, double the recipe and use a 10-¼ inch cast iron skillet or a 9- x 9-inch baking pan.

So if you want a fast, satisfying dessert for two that's made for long summer evenings, whip up a quick and easy Mini Skillet Mixed Berry Crisp. Add a scoop of ice cream to melt on top and you're set.

There are many ways to enjoy a treat if you're on a special diet. Here are some ideas that are all dairy-free, and I have many more. Have a go!

Use a mixture of any berries or chopped fruit you prefer. Some suggestions could be raspberries, pitted cherries, peaches, or apples. See below for Peach or Apple Crisp variations. I like the crunch of nuts in the topping, but they're optional. Use any sliced or chopped nut you'll like, or leave it out altogether. For a larger crowd, double the recipe and use a 10¼ inch cast iron skillet or a 9- x 9-inch baking pan. Bake for 30 to 35 minutes. Variations:

Cooling temperatures means cozy sweaters and trees showcasing their Autumn beauty. Fall flavors feature apples, pumpkin, maple, and warm baking spices (Pumpkin Spice, anyone?). From pies and cakes, to scones and crisps, give one of these Fall favorites a try!