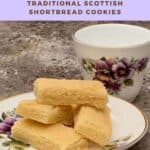 Scottish shortbread cookies are so easy to make, using just three basic ingredients. There are many variations of these classic butter cookies, and they can also be used as a crust for pies and bars. Make a batch today!

[August, 2019: I've reworked the recipe and updated this post with all new pictures. Enjoy!]

What comes to mind when you think about shortbread cookies?

For me, shortbread is so associated with Scotland, red tartan boxes automatically come to mind. Walkers Shortbread is the gold standard of commercially made Scottish shortbread, and they even did a tie-in with Outlander.

And while Walker’s is very good, homemade shortbread cookies are actually incredibly easy to make, using only three ingredients!

Well, maybe four...I’ll get to that in a few minutes.

Why is it called shortbread?

To answer this question, let’s turn to that most trusted of sources…Wikipedia:

"Shortbread is a biscuit traditionally made from one part white sugar, two parts butter, and three parts flour. Other ingredients like ground rice or corn flour are sometimes added to alter the texture."

Originating in Scotland, the first printed shortbread recipe appeared in 1736, from a Scotswoman named Mrs. McLintock.

But even before that, shortbread cookies (or more accurately, shortbread biscuits) were widely associated with Christmas and Hogmanay (New Year's Eve).

It was even said that "Mary Stuart, the 16th century Queen of Scots, was famously fond of shortbread and contributed to the beloved pastry's elevation in status.," according to The History of Shortbread.

Shortbread's popularity is universal. Walkers Shortbread is exported around the world in their iconic Royal Stewart tartan.

Lots of info here…definitions, history, and some math, too (yay!). But nary a word about why it’s called shortbread.

What being short does to pastries

For that, let’s visit British Food: A  History:

Alright, so it’s the presence of lots of butter that makes it short?

We're getting closer, but we’ve still not answered the etymology question. Why is it called shortbread?

Well, The History of Shortbread mentions "(i)n medieval times, the word "short" applied to crisp, crumbly things. In the 17th century, this term began to include baked goods such as bread, cakes, and biscuits rich in fat such as shortening or butter."

Ironically enough, those medieval chefs described not only the name of the pastry, but what happens chemically in the dough. For that, let's turn to HuffPost Taste:

"Shortening got its name because of what it does to flour. Introducing fat into baked goods interferes with the formation of the gluten matrix in the dough. As a result of its interference, gluten strands end up shorter which in turn creates a softer, more crumbly baked good.

It’s the reason that cakes and pastries are soft and breads not so much. But funny enough, shortening got its name way before anyone knew anything about the chemical reaction of fat and gluten, and that’s because the word short used to mean tender in reference to food."

Now we’re getting somewhere! Math and Science in one little cookie. Fabulous!

Whew…that was exhausting! But don’t throw in the towel just yet (especially since I have enough laundry to do as it is).

Let’s look at the info from Wikipedia again.

There’s made mention of two interesting trivia tidbits: the recipe ratio of 3-2-1 flour-butter-sugar, and something about altering the structure using other ingredients.

Shall we dive in a bit deeper, then?

There are many different versions of the flour-fat-sugar amounts in shortbread recipes, and how soft, sweet, soft, or buttery the results are varies considerably.

I had never seen the ratio of flour, butter, and sugar mentioned before I started researching this post. Naturally I had to check to see if my basic recipe fit the bill.

No wonder my shortbread is buttery goodness!

The type of butter matters

I keep saying there are only three ingredients to homemade shortbread cookies, and that's true, up to a point.

There's an assumption that you'll be using salted butter. If you're using unsalted butter you have to...say it with me now...add salt.

Why does the recipe assume salted butter is being used?

Remember that the original recipe was first written in the early 18th century, and presumably made even before that. Salt was used to keep butter fresher longer without the need for refrigeration.

Nowadays, most bakers use unsalted butter so we can control the amount of salt in the dish.

Use either kind of butter you'd like, but add salt if needed. So there are three (and possibly four) ingredients in a traditional shortbread recipe.

How to make Scottish Shortbread

There are two different ways to make the shortbread dough.

One technique mixes the flour and sugar together, then cuts in the butter, like if you were making scones (before adding cream, that is).

The other creams the butter and sugar together (photo 1), then adds in the flour (photo 2).

I like the latter method more the simple reason that it's less work by hand. Let the mixer to the job!

Press the dough in a 9- x 9-inch baking pan, smoothing it out as evenly as possible, then pick the dough with a fork (photo 3).

I cover my dough with plastic wrap and start by using my hands, then use a pie pan roller to get the dough as even as possible.

Chilling the dough while the oven preheats gives the butter time to firm up so the resulting shortbread is nice and tender.

If you prefer a thicker and softer shortbread, bake the dough in an 8- x 8-inch baking pan. You can also be double the recipe and bake it in a 9- x 13-inch baking pan for 30 to 35 minutes.

The shortbread bakes 25 to 30 minutes. It's best to cut the shortbread into squares or bars when it first comes out of the oven. The dough will be soft and forgiving (photo 4).

If you wait until the shortbread cools before you cut it, you'll have a lot of crumbs to contend with.

Why do some recipes use cornstarch in shortbread dough?

Some recipes add cornstarch to the dough, which helps to make the gluten in the flour "shorter." Other recipes call for powdered sugar (which contains cornstarch) for the same reason. However, butter also can shorten the gluten, and since my recipe has a higher butter ratio to flour than most, there's no need for cornstarch here.

The main difference is that shortbread doesn't use leavening, like baking powder or baking soda. It relies on the high butter content to keep the cookie soft by shortening the gluten in the dough.

Why do you poke holes in shortbread before baking?

You poke holes in shortbread for the same reason as docking a pie crust. There's a lot of butter in the dough, and as it bakes it releases steam. Since you want the cookies to be nice and flat, poking holes allows the steam to escape so the shortbread bakes up flat and even.

Shortbread is a very versatile cookie. It's like the vanilla ice cream of the cookie world. Make a plain dough, or flavor it with different add-ins like lemon zest, almond extract, or essence of lavender. Maybe substitute brown sugar for the white sugar for a richer flavor.

I've even made savory shortbread with garlic powder and parmesan cheese (yes, I omitted the sugar).

Shortbread is also commonly used as a base for pies and bars. You don't think about it, it's just there. Think lemon bars (or maybe Mint Lemon Lime bars?). Most pies that use a pastry crust can also be turned into pie bars (aka slab pies). Pecan bars and Brown Sugar Pie bars come to mind.

Think of the possibilities!

Whenever I have a craving for a cookie that doesn't take too much effort, I make a batch of shortbread cookies. They're easy, tasty, and really fun to play with variations.

Shortbread isn't just for eating out of hand (although that's a big plus!). It's also used as a base for cookie and pie bars. Quick and easy! 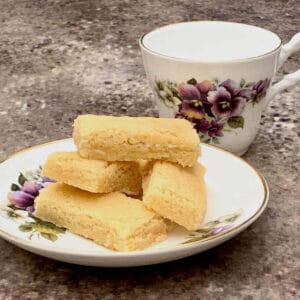 You can use either unsalted or salted butter for shortbread. If you do use unsalted butter, add ½ teaspoon of salt in with the flour. If you prefer a thicker and softer shortbread, bake the dough in an 8- x 8-inch baking pan. You can also be double the recipe and bake it in a 9- x 13-inch baking pan for 30 to 35 minutes.

No-bake treats for a hot summer

When it's too hot to bake, you still have options for dessert. Candy and truffles, pie, brownies and bars, and ice cream all don't require you turning on the oven. Plus, learn how to temper chocolate for dipped treats. It' all here for you!