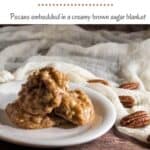 Pecan Pralines are pecans embedded in creamy brown sugar that slowly & luxuriously melts in your mouth. Easy to make with a candy thermometer!

Generally speaking, I love to bake. Yes, there can be pitfalls, from mismeasured ingredients to overheated (or underheated) ovens, but more often than not things turn out well.

Candy making is a whole other ball o’wax…if baking is temperamental, working with sugar is downright ornery. When you’re boiling sugar for candy, a few degrees can make a huge difference.

That's what I learned from making Pecan Pralines.

(What are Pecan Pralines? Aren't they just candied pecans?)

No, these are mounds of what can only be described as pecans embedded in a creamy, brown sugar blanket that slowly and luxuriously melts in your mouth.

So why am I highlighting pralines? Well, it’s the heating of the sugar to the precise temperature of 239°F, what is called soft-ball stage, that makes or breaks this recipe.

It’s been hit-or-miss for me when I’ve tried it, even with a candy thermometer, because I never really paid attention to what soft-ball stage really meant. And believe me when I tell you it means a lot!

There are six stages in candy making: thread, soft-ball, firm-ball, hard-ball, soft-crack, and hard-crack. Boy, there are so many asides I could make about these names!

I won’t bore you with the characteristics of each of these stages (you can go to the Exploratorium's website and bore yourself without me), but I want to highlight the soft-ball stage:

So the soft-ball stage is when the sugar syrup will have some cohesion, but it will keep the candy soft…think fudge.

What soft-ball stage temperature to use for pralines

But just using the thermometer isn’t enough…candy stages are a range of temperatures. Since a few degrees makes a difference, where in the range you decide to proceed with the recipe is crucial.

If you cook the candy until 234°F (the lowest temperature of the range), the finished pecan praline will be dry and grainy rather than soft and satiny.

Waiting until the candy gets to 239°F (which, incidentally, was labelled “soft-ball” on my candy thermometer) will yield smooth creamy brown sugar goodness that just melts on the tongue.

Candy making is easy after all

After you master the art of soft-ball stage patience, making a recipe for Pecan Pralines is merely the task of cooking, stirring, cooking, and stirring again.

Start with quality ingredients. I use light brown sugar so as not to detract from the pecans by introducing a darker molasses flavor. I'm looking for balance.

When you chop the pecans, you'll want them small enough to fit into a mound of candy, but not so small as they become lost in the candy.

After combining the candy ingredients, stir over low heat until the sugars dissolve. Then kick up the heat to medium and boil the syrup until you reach that magic soft-ball stage temperature of 239°F (it'll take about 10 to 15 minutes to get there).

Stir in the pecans and continue to boil the candy for 2 minutes, then add in the rest of the mix-ins. Stir to cool the pralines down a bit.

Work quickly when portioning out the mounds. The candy will firm up quickly, making it harder to scoop.

The right way to say pralines

One more point…I had always pronounced these as “Pray-leens,” but recently I was corrected: they should be called “Prah-leens.”

It's good to learn.

However you pronounce Pecan Pralines, I hope you will try them. Be sure to have your candy thermometer (and patience) handy, and give it a go.

They'll melt in your mouth with caramel goodness balanced with a crunch of buttery pecans. Mmmmmm…

Easy recipes for candy and fudge

Candy making doesn't have to be hard, and making fudge definitely isn't. And if you want to try your hand at chocolate dipped treats, here's a guide to temper chocolate for that satisfying snap. 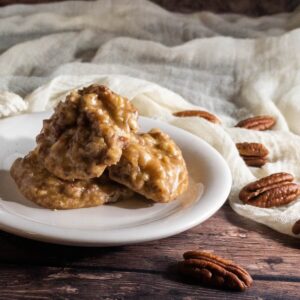 If you don't have a candy thermometer, a digital thermometer will work as well. Just be sure it's not touching the bottom of the saucepan.