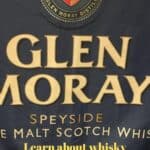 Whisky has been described as beer that's grown up, but whisky production requires skill & time. Pull back the curtain and learn the details, plus tasting notes from Glen Moray Single Malt Scotch Whisky tasting.

I’ve heard whisky described as “beer that’s grown up.” You make beer, distill and age it, then drink (responsibly, of course).

Is the process of making uisge-beatha (pronounced “ooska-veha” and literally means “water of life” as Irish monks of the early Middle Ages called their precious liquid) really that simple?

Well, yes and no.

There is a lot of nuance and skill only years of experience can bring that goes into every step of the process, and each distillery has a Master Distiller for a reason (not every Tom, Dick, or Tammy can pull it off). But at its most fundamental, the steps to whisky production are fairly straightforward.

Let’s pull out the blackboard and review, shall we?

So how is it made, scotch?

There are plenty of YouTube videos about the whisky making process. A quick “how is whisky made?” search there produced about 277,000 results, and that doesn’t even cover the distilling company’s own websites.

I mentioned a cute cartoon on Kilchoman’s distilling process. I also came across The Glen Moray Experience. It's a wonderfully simple yet informative four minute video on whisky production.

I took notes (content credit goes to Glen Moray…I’m just summarizing), so you can sit back as I put on my robes and mortarboard for a quick lesson…

[Nerd Alert…if you want to skip down to the tasting notes to avoid ruining your sleep cycle with my droning, feel free, but you won’t do as well on the test later.]

In a nutshell, here’s how Glen Moray’s Single Malt whisky is made:

How’s that for a brief master class? Is your brain dribbling out your ears? How about a drink (or at least a description of one…)?

And now for the whisky production test...who remembers what the mash tun is? Don’t all call out at once. How about green malt? Spirit safe?

Now let’s all pour out a dram of our favorite spirit and toast to those who discovered and perfected this incredible process. Kudos!

Scotland's whisky regions have such a rich and diverse array of flavor profiles and distinct characteristics from which to choose. Here's where you can find a scotch I've reviewed from Speyside. Slainté!

Cooling temperatures means cozy sweaters and trees showcasing their Autumn beauty, while Fall flavors feature apples, pumpkin, maple, and warm baking spices. From pies and cakes, to scones and crisps, why not give one of these Fall favorites a try?