Nanaimo bars are a no-bake layered cookie bar treat with a chocolate base, a thick white buttercream center, and a blanket of chocolate on top. Incredible!

Hey Canada, why have you been holding out on me?

I mean, yes, growing up in Southern California I didn’t have much contact with your delectable treats (maple syrup being the exception), but my husband lived in Vancouver for a short time when he was a boy, and he neglected to tell me about them.

It took a slip of the tongue from a Whisky Wednesday friend to break the silence (it was at the end of the tasting, so don’t blame him).

Now I know, and I’m going to share your secret with the world…Nanaimo Bars exist, and they’re incredible!

What are these underrepresented (at least in the US) delicacies, you ask? They’re a no-bake layered cookie bar with a chocolate graham cracker & coconut base, a thick white buttercream frosting filling, and topped with melted chocolate (like a variation on Millionaire's Shortbread).

Keith Corbett, my WW friend who hails from Toronto, let slip that he missed the Nanaimo Bars that his college roommate used to make (they would pair them with brandy). I once visited Nanaimo, a ski resort outside of Vancouver, but that’s really irrelevant to these bars. Keith offered to send me his roommate’s recipe, and once he did I headed off to find out more.

I learned that these bars are a particular Christmastime treat in Canada, although since they’re a no-bake treat I wouldn’t be surprised if they were made year-round.

Adapting the recipe for Nanaimo Bars

I found a recipe for The Best Nanaimo Bars on Bake. Eat. Repeat.  which basically resembled the recipe Keith sent me (when doubled).

However, I adapted the recipe to suit my tastes. I’m not a fan of coconut, so I just left it out of the base (that sound you hear is a collective gasp from north of the border).

I did find this note in the comments section of the base recipe: "Regarding the Coconut: Crisped rice would be an okay substitution, but I don't think it could be called a Nanaimo bar then, the coconut is a pretty integral flavour in them! But it would be tasty I'm sure! To make them coconut free though, I might be more inclined to just increase the graham crumbs, then the texture would still be the same, although the flavour would be different."

I guess I’m not the only one who’s thought about leaving out the coconut. Hopefully Canada will just collectively shake their heads at us, sigh deeply, and move on.

The filling also called for something called custard powder, which turned out to be Canadian for cornstarch flavored with vanilla powder (maybe that’s how Canada kept us Americans in the dark about Nanaimo Bars? One never knows…). I used plain cornstarch and added vanilla extract to keep the filling flavor profile as close as possible to the original.

The steps to making Nanaimo Bars are similar to making Double Chocolate Peppermint Brownies. You make the base, spread on the filling, then top with a blanket of chocolate. These are no-bake cookie bars, meaning you chill the bars with each layer. No oven-heated kitchen needed!

I learned a thing or to when I made the Nanaimo Bar recipe (not having a local Canadian to ask). Here are my tips and tricks:

Where did I serve them? Why, at Whisky Wednesday, of course!

I made sure Keith would be there, and he (and the rest of the WW crew) loved them. Keith even commented that these bars may be even better paired with the single malt scotches we were tasting than with the Courvoisier VSOP from his college days. Whew!

Canada, your secret is out, but I, for one, am grateful. To Canada from Boston, with love!

Bar cookies, brownies, and pie bars (aka slab pies) all are recipes that make a lot with little effort (and no individual portioning). Here are a few ideas for these yummy treats! 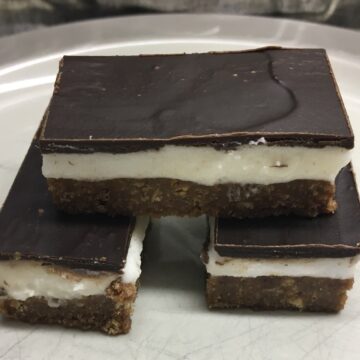 If desired, omit the shredded coconut and add an additional ½ cup (57g) of graham cracker crumbs. It's a matter of personal preference, of course. Store covered in the refrigerator for a week, or freeze in an airtight container for up to 3 months.